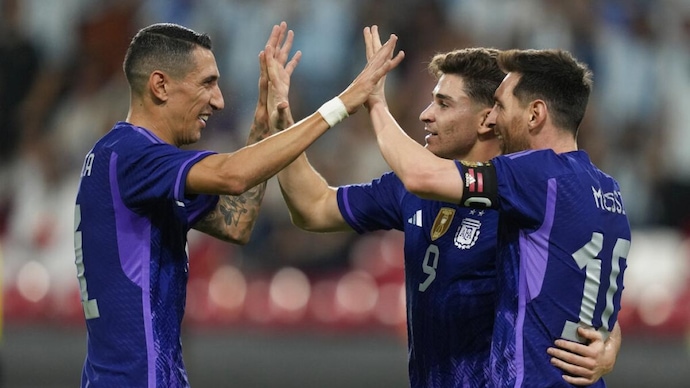 Di Maria doubled Argentina’s lead just eight minutes later with a fantastic volley, after full-back Marcos Acuna delivered a well-placed cross into the area from the left. The former Real Madrid, Manchester United and PSG man doubled his goal tally in the 36th minute as he dribbled past several UAE defenders to make it 3-0 in Argentina’s favor.

With just a minute before half-time, Messi joined the party after he slotted a fine shot in the corner of the goal after Di Maria played him in.

Argentina coach Lionel Scaloni made four changes at halftime but opted against resting his star player, leaving Messi on for the full 90 minutes. Inter Milan’s Joaquin Correa completed the hammering through a deflected goal in the 60th minute.

Argentina, who are one of the favorites to lift the prestigious World Cup trophy, will return to Qatar on Thursday. They will fight it out with Mexico, Saudi Arabia and Poland in Group-C of the competition. Messi and co. will lock horns with Saudi Arabia in their opener on November 22.

In another warm-up match, 2018 World Cup finalists Croatia beat Saudi Arabia 1-0 in Riyadh. Hoffenheim striker Andrej Kramaric scored the only goal of the game to guide Croatia to a win. Croatia star and captain Luka Modric played only the last 25 minutes, enough to set up Kramaric for the winner in the 82nd minute. Croatia is in Group F along with Belgium, Canada and Morocco.