Former cricketer Kevin Pietersen has made a bold remark after seeing Pakistan’s score in the first 10 overs of the T20 World Cup final on Sunday. The English bowlers were on song in Melbourne as they restricted Pakistan to just 137 runs. 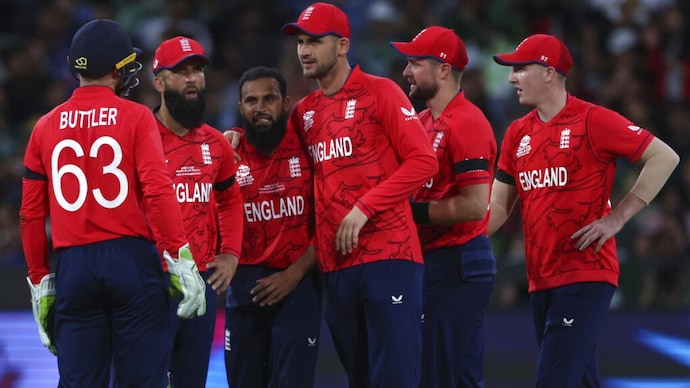 The England bowlers were in top form on Sunday (Courtesy: AP)

By India Today Web Desk: Former cricketer Kevin Pietersen made a bold claim about the T20 World Cup final between England and Pakistan, saying that the game is surely going in favour of Jos Buttler and his men.

Having won the toss, Buttler decided to bowl first in Melbourne and admitted that the weather conditions did play a big role in his decision.

Pakistan got off to a slow start and lost the wicket of Mohammed Rizwan with just 29 runs on the board. At the end of the powerplay overs, the Asian giants scored just 39 runs for the loss of one wicket.

Adil Rashid would then get the wicket of the dangerous Mohammed Haris at the beginning of the seventh over as the England bowlers kept applying pressure on the Pakistan batters.

At the halfway mark, Pakistan could only reach 68 runs for the loss of two wickets and this made Pietersen make a bold claim on Twitter. The former cricketer said that after seeing the score it was pretty evident that England would win the match and it was game over for Pakistan.

“Just popped back to the TV from filming and I see it’s 2 down for 60 odd through 10. GAME OVER! England WIN!” said Pietersen on Twitter.

In the very first ball of the 12th over, Rashid would claim the big wicket of Babar Azam with a terrific bit if fielding from his own bowling. It also ended up being a wicket maiden as well.

While Shan Masood and Shadab Khan did get a partnership going, Sam Curran and Chris Jordan broke the back of the Pakistani batting lineup to ensure that they were able to restrict them to a total of 137 runs for the loss of eight wickets.

The English bowlers have been right on the money in the last two matches and could be the main reason why England may end up lifting the trophy.